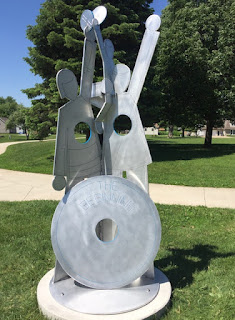 "We have just finished installing a new sculpture titled THE BEGINNING in Spencer," said Lieb. "It is located two blocks west of Grand Avenue on 11th Street in the southwest corner of North School Park." THE BEGINNING is 8’-6” tall and fabricated of 1/2” thick aluminum plate. 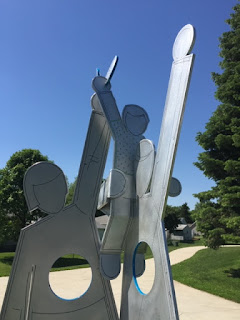 The sculpture marks the beginning of the hiker/biker trail heading north out of Spencer and connecting, eventually, with the trail leading south out of Milford. The primitive wheel in front metaphorically represents the beginning of the bicycle. The mother and father figures once had a wheel image on their shirts to express their passion for bicycling. Those symbols were removed and are being handed to their child, thus passing on their passion to the beginning of a new generation of bicyclists. The openings left in their shirts provide an opportunity for interested trail users to position their faces, have their photo snapped, and become a part of the sculpture. Stop by and see it the next time you are in Spencer! 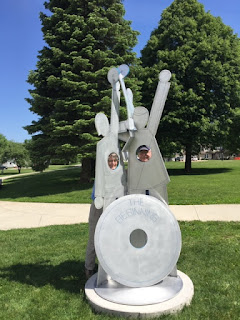 LAST CALL FOR ARTISTS FOR THE 2021 ARTISANS ROAD TRIP!