that feature her artwork! 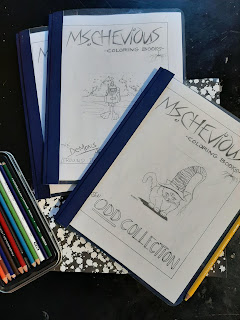 "The last three years have been an explosion of creativity and productiveness for me, and before I knew it, I had a few different series of original drawings," says Cable.  "Each original was scanned in as a final lined artwork before they continued their journey as an original watercolor painting.  I ended up with three different collections that I was able to work into four separate 20-page coloring books, mainly entertaining teens and adults."
"The first two books in the series highlight my demons, and are titled “The Demons are Our Friends!”, Rounds 1 and 2.  Over 40 original drawings have illustrated my personal battles with my own demons. They express all of the grace, humor, and peace that I have earned through the years….we swim, dance, and draw together.  Many also feature other animals that mirror the demons themselves-the whimsy of the owl, the innocence of the squirrels, the awkwardness of the porcupines, and chaos of the hyenas.  The series is meant to be whimsical, but also to serve as a reminder that even in our darkest times, we are not alone. 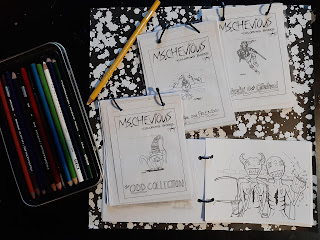 “The Odd Collection” features sloths on rockets, owls on crutches, Cthulhu floating with his balloons, and my entire “Octopus+Skull+Fruit” series.  There’s a wide variety of spooky and macabre illustrations that are just plain fun.

Finally, I ended up making a “Nerdin’ Out Collection,” because I had been getting many requests for my stylized approach at the comic book conventions I normally frequent.  I feature many pop culture icons, such as Harry Potter, Hocus Pocus, Teenage Mutant Ninja Turtles, and various superheroes. They are instantly recognizable and often laughable, such as Spiderman knitting a scarf on a skyscraper-or the Hulk baking cookies."

These 20-page collections are made by hand, and feature two different sizes. The 8.5”x11” and the 4”x6” travel size are both available for $10 each (includes shipping). Orders can be made through her Facebook page, www.facebook.com/ms.cheviousmurals.
at September 09, 2020 No comments: